Craving for a unique chicken recipe tonight? What’s better than this Easy Chicken Pot Pie Recipe to keep you warm during winters?! Let’s quickly take you through the recipe! Don’t forget to invite guests because this is gonna be oh-so-tasty! 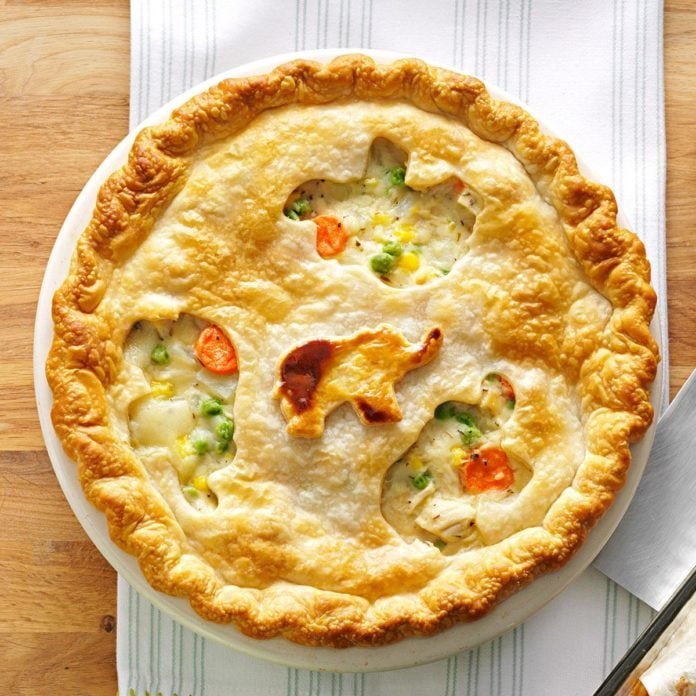 — Make the dough: Place flour and butter into the freezer for 30 minutes before starting crust process. In a large food processor, pulse flour, baking powder, and salt until combined. Add butter and pulse until pea-sized and some slightly larger pieces form. With the machine running, add ice water into the feed tube, 1 tablespoon at a time until dough just comes together and is moist but not wet and sticky (test by squeezing some with your fingers).

— Turn dough onto a lightly floured surface, form into 2 balls, and flatten into 2 discs (making sure there are no/minimal cracks). Cover with plastic wrap and refrigerate for at least 30 minutes.

— Cook chicken: Preheat oven to 400°. Grease a large baking dish with butter and grease one side of a large piece of parchment with butter. Season chicken all over with salt and pepper then place in baking dish. Place buttered side of parchment paper over chicken, so that chicken is completely covered. Bake until chicken is cooked through, 30 to 40 minutes. Let rest 10 minutes before cutting into cubes.

— Reduce heat to 375° and bake pie until crust is golden about 45 minutes. Let cool for at least 15 minutes before serving.